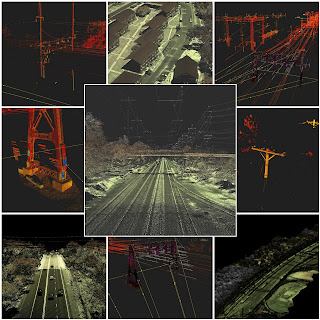 PROBLEM
Due to the narrow high speed rail corridor AXIS recognized from the outset the limited instrument set up locations. Through careful planning and execution, difficulties with control geometry were avoided. The remaining challenge was related to the narrow incidence angle of the laser scanner beam with some of the wires, this was mitigated by placing control to cover shorter spans of wires, and gathering both overlapping and redundant data from adjacent control points.

After orientation to the work area and railroad safety requirements, AXIS first located existing control points on each end of the area of interest. A control traverse was run through the work area as needed to connect to existing control points, and to establish control for the laser scanner data collection. AXIS used a combined workflow for the project, which meant that while the instrument was in place to set control, a second workflow for the laser scanner was initiated, eliminating the complicated logistics and multiple setups required if both a surveying instrument and a laser scanner were deployed on the project. The single occupation work flow also served to minimize errors in the dataset, which are introduced every time an instrument is setup or removed from a control point.

During the data collection workflow, separate conventional laser measurements were observed to selected features in the work area that were visible from adjacent control points. Positions of these features from all control points were compared and used to verify the integrity of the control points and laser scanner.

The full dataset was analyzed prior to delivery to the point cloud modeling team, ensuring the terrestrial data was fully valid, complete and geometrically sound before it was integrated into the airborne dataset. The fit of the terrestrial data into the airborne data without any adjustment proved the validity of both datasets, which were collected by radically different platforms and technologies, tied together by a common, high precision control network.

LESSONS LEARNED
When the terrestrial data was compared to airborne laser data, the redundantly collected data matched closely to the aerial data, independently confirming the quality of the entire dataset, while densifying and clarifying catenary and guy wire locations thus yielding a highly precise and accurate map of the entire work area. The use of a high precision control network and careful planning allowed a seamless point cloud to be developed for the client.

BENEFITS
The final deliverable was a high density point cloud showing the location of a large number of wires following different paths along a narrow corridor enabling the design team to analyze the paths of the wires as they crossed and re-crossed each other in different planes. Additionally, wires connecting the catenary wires to a transformer field, as well as unrelated power and transmission lines were located and modeled as they ran along the rail corridor or crossed it.

The project was completed ahead of schedule and on budget.

Posted by erica insley at 9:36 AM No comments: