We get quite a few questions about the contour lines produced as part of the dataset from our HD-LiDAR process. They are typically described as “jagged” or having too many bends. While most engineers and surveyors are familiar with the concept of what contour lines represent, they are used to contour lines produced based on data collected by a survey crew, which collect data along features and on approximate grids for areas of constant grade. This grid is typically spaced at 50 foot intervals for larger areas, but can vary in density based on field conditions, budgetary constraints and the experience of the field crew. The wide grid scheme, and use of smoothing or splining settings in the computer yield contours which are pretty, but live up to their traditional definition of showing approximate lines of equal elevation. LiDAR data collected at our typical densities yields a grid with spacing of approximately 1 foot. 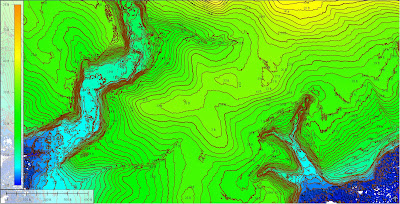 The increase in density of measurements brings to the table an amazing amount of detail that no surveyor would ever collect due to the time involved. LiDAR data shows small undulations in terrain, particularly in flat areas like parking lots and fields. Another area that shows increased detail is sand dunes, disturbed earth on construction sites, quarries, landfills and stockpile yards. Airborne LiDAR strikes a very efficient balance of covering large areas with a substantial amount of detail without the burden of collecting hundreds or thousands of points per square meter typically yielded by terrestrial scanning units. When the DTM is produced, using breaklines that are all based on 3D points that in essence identical to measurements produced by a survey field crew, the contours reveal a much more accurate and precise representation of field conditions.

To view live HD-LIDAR datasets contact us today - viewable online or we can visit your office.
Posted by erica insley at 4:22 PM No comments:


One of our clients recently had a new transit station project in which the engineering team needed detailed surveys for the design project.  Traditional surveying methods would have involved months of preparation, many railroad safety flaggers and would have resulted in higher costs to the client.

In just one pass of our aircraft, AXIS was able to map an area with a ground point density of approximately 30 to 40 points per square yard; locating power lines, poles, rail lines, buildings, pipes, curbs, vegetation canopy, overpass/bridge clearances and every other landscape feature within the aircraft’s mapping swath.  The landscape and terrain are mapped with what is called a “Point-Cloud” rather than the traditional CADD-Only map format. 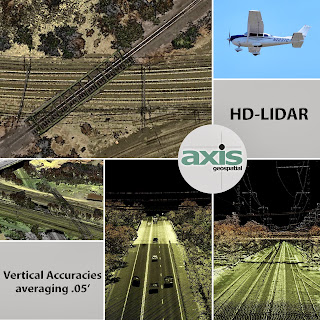 HD-LiDAR kept land surveyors from having to navigate an active railroad and rail yard, accelerated the schedule by avoiding months of approvals for access by the rail authority and delivered a new type of mapping data the engineers would have never received otherwise.

Visit http://www.axisgeospatial.com/transportation-mapping/ to view some of our recent transportation mapping solutions for design & monitoring projects. Let’s discuss your project goals, objectives, budget and schedule to determine if HD-LiDAR technology is right for your project.

Posted by erica insley at 4:22 PM No comments: